The Real World: Data and Modelling

Let’s begin with the problem which we’re trying to solve in the first place: we have some acquired data and we would like to predict future instances. Using the same starting point as my post on neural ODE’s, we can formalise this setting as follows: 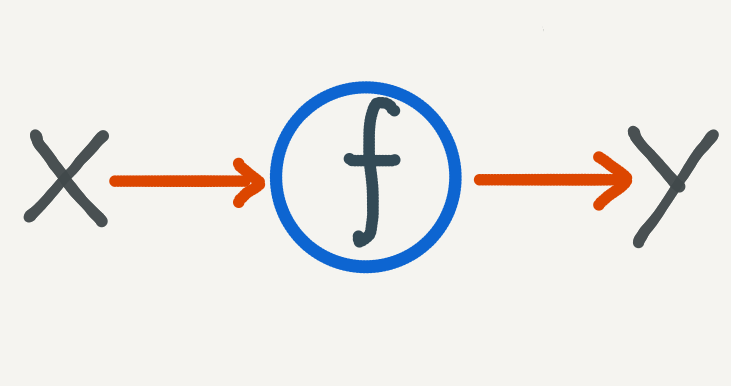 We model the problem as trying to find a function mapping from \(\mathscr{X}\) to \(\mathscr{Y}\).

The machine learning approach is to choose a flexible class of functions, typically neural networks, which are described by parameters \(\theta\). We use a learning algorithm, such as stochastic gradient descent, to optimize the parameters \(\theta\) such that the function \(f\) is a good fit for the data. What we mean by a “good fit” is codified by a cost function which is minimized during the learning procedure. Traditionally this cost function measures the degree to which the data fits the model well. If not, then adjust the parameters of the model and measure again until the cost is sufficiently low. 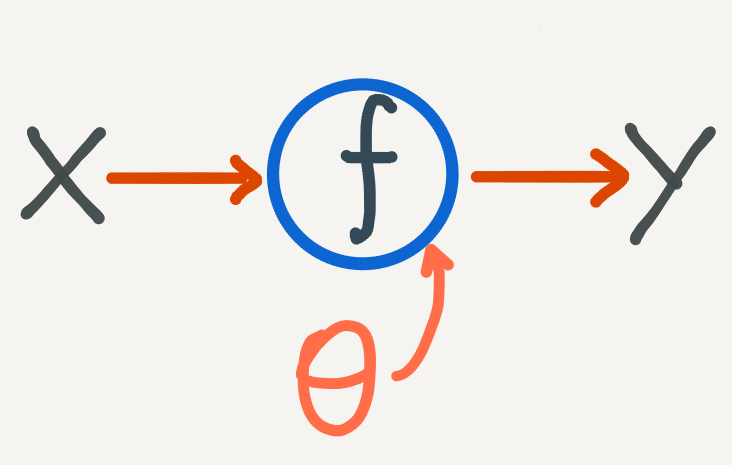 In general uncertainty is desirable if the variance in the data is large. The learning algorithm finds \(\theta^{*}\) which works for most of the data points which we’ve seen so far. How reliable will \(\theta^{*}\) be, when \(\mathscr{x}\) is an outlier - when it is not like most datapoints?

Uncertainty is also desirable when we don’t have a large number of samples. In this case, if the variance is large between each sample, then we may not have enough evidence to support any one particular value of \(\theta\). Instead we would like a way of making predictions which accounts for our uncertainty on the value of the parameter \(\theta\) itself.

This is precisely what we will try to achieve with Bayesian inference.

Bayes’ Theorem is useful when it is difficult to calculate the posterior of \(B\) directly. We use Bayes’ Theorem when we have obtained data on \(A\) and we can measure the likelihood and prior with greater ease.

* for more detail on random variables and probability measures, see my introductory post on probability.

But what does it mean to include uncertainty into our modelling of \(f\) and \(\theta\)?

This means precisely to use probabilities - the mathematical language of uncertainty - and in particular it means to use probability distributions. Instead of optimizing for a single value of \(\theta\), we can treat \(\theta\) as a random variable which has highest probability at the optimal value.

But how do we ensure that the probability distribution over \(\theta\) has highest probability at the optimal value?

We do this by using Bayes’ Theorem. In particular we can start with a best guess at what this distribution may be and call it our prior distribution

How do we know what a good prior distribution is?

What’s important in Bayesian inference is that whatever choice of prior we choose, the additional data which we obtain will alter the shape of prior to inform our target posterior distribution. Going back to Bayes’ Theorem we can incorporate the data \(\mathscr{D}\) into the formula using the likelihood

Now we can use Bayes’ Theorem to write down a formula for the posterior distribution of \(\theta\):

How does this posterior distribution help us?

Instead of calculating a single estimate of the optimal \(\theta\) we look for a (posterior) distribution on \(\theta\). From this distribution we can calculate a sample mean for \(\theta\) and report our confidence over a credible interval - say the middle 95% of the distribution. 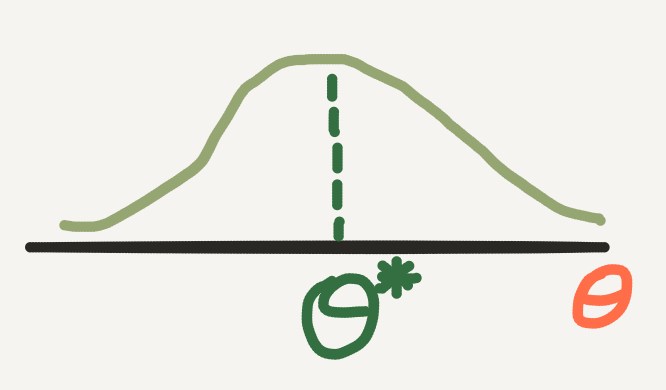 Going back to the original function estimation problem, this means that when we calculate predictions for \(\mathscr{y}\), we first estimate \(\theta\) from the posterior so that our predictions become conditional on \(\theta\): 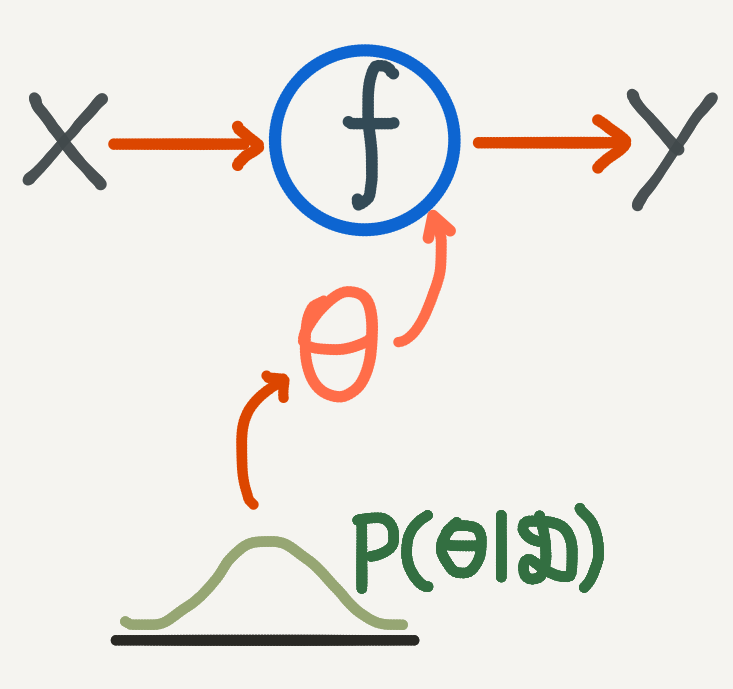 But it turns out that calculating this posterior can be hard with a capital H. For two reasons:

The algorithmic insight is to use what’s called approximate inference. Instead of calculating the posterior directly, we will try to approximate it.

Broadly speaking there are three main types of approximate inference algorithms, with the first two being the most popular. Briefly, they are:

While I won’t go into more detail into each of these algorithms - they are entire blogposts (and more!) unto themselves - I will try and unravel the basic fundamentals of approximate inference for the remainder of this blopost.

\(^{*}\)The name variational inference comes from variational calculus which is the calculus of finding functions by varying their parameters. The function \(q\) is sometimes known as the guide.

A Chicken and Egg problem

We get around this as follows:

We can express the cyclic nature of Bayesian inference graphically in the following way: 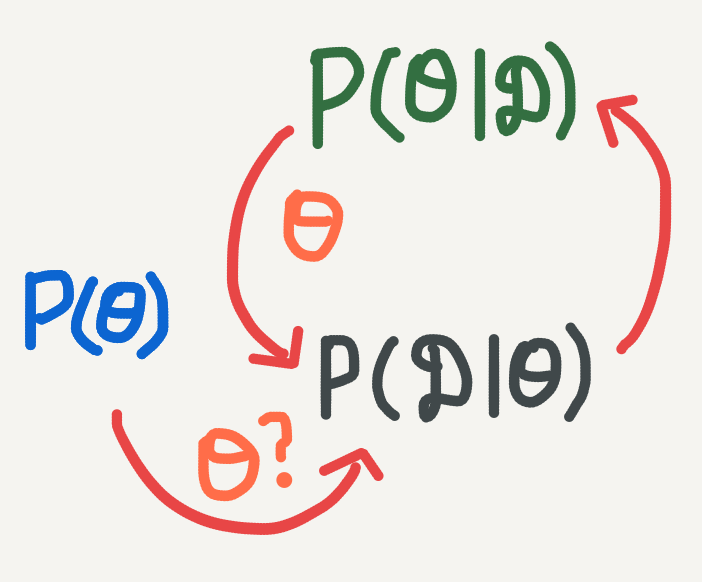 Given a prior distribution and likelihood function:

Note: For variational inference we instead update the parameter \(\phi\) to obtain a good functional approximation of the posterior distribution, and from this approximation we will sample \(\theta\).

Going back to the graph, we are essentially unrolling the cyclic relationship between the posterior estimate and the sampling of \(\theta\) into a successive sequence of algorithm iterations:

Start with an initial value for \(\theta\). Successively update the posterior and then sample a new estimate of \(\theta\).

The exact details of steps 2-4 and when we determine to terminate the algorithm will depend on the choice of algorithm used. Although these algorithms are beyond the scope of this introduction to approximate inference, I intend on covering them in future posts.

Tying it back together

What we have seen so far is that when we want to express uncertainty over the modelling parameters in a machine learning problem, we can use Bayes’ Theorem to help us. Specifically

Once we have this posterior distribution, we can make a prediction \(y^{*}\) at a new point \(x^{*}\), using the so-called predictive distribution - the probability distribution over \(y^{*}\) given \(x^{*}\) and our uncertainty over the parameters \(\theta\):

To measure the uncertainty of our prediction we can calculate a sample variance:

Bayesian Inference is a Modelling Paradigm

Bayesian Inference is an Optimization Paradigm

In the traditional machine learning approach we can only find a single point estimate of the optimal parameter \(\theta^{*}\). This is known as a maximum likelihood estimate (MLE) and can be interpreted as follows: if true, we would likely observe the data which we have under this model.

In the Bayesian inference approach, we use the likelihood to reshape the prior distribution into a posterior distribution which places highest probability over the optimal \(\theta\). This \(\theta\) is sometimes known as the maximum a posteriori estimate (MAP), and can be interpreted as the parameter which is a best fit for the data, given our uncertainty.

In modern machine learning, Bayesian inference gives us a framework by which we can resolve the desire for an accurate algorithm with a measure of uncertainty. Using approximate inference we can scale Bayesian inference to large datasets and models with high dimensional parameters, such as neural networks.

Really this whole post has been about how we can rethink machine learning using Bayes’ Theorem, and that ultimately, is what Bayesian inference is.

In a way we can think of Bayesian inference (and machine learning in general) as an exercise in compression. We don’t have access to all the data in the world for our problem. Instead we use the data which we have to optimize the parameters \(\theta\) of a function which we hope can describe the relationship between \(\mathscr{X}\) and \(\mathscr{Y}\). In general the dimensionality of \(\theta\) is much lower than the data, so really we are compressing all the information in our dataset into the parameter \(\theta\).

When we go in the forward direction of Bayesian inference, we are finding the \(\theta\) which most likely describes the data. In other words, the likelihood helps us to encode the data into \(\theta\). When we go in the backward direction (posterior inference), we sample many values of \(\theta\) to account for our uncertainty. If our posterior distribution is good, then we will almost always sample the optimal value of \(\theta\) such that such that we should be able to recover original dataset. In other worlds the posterior helps us to decode the input to our target values.

Photo by Dattatreya Patra on Unsplash