A Game of Dice

In my last post I discussed probability as a way of the measuring the uncertainty of an event. We thought of probability as assigning a weight to the chance that an event has a particular outcome, which we measured relative to other possible outcomes. We defined an event space, which we called \(\Omega\). On this space of events we defined a random variable, \(X\), as a function which maps each event to our observed outcomes, encoded as numbers on the real line, \(\mathbb{R}\):

Thinking About the Past

However, what if we were able to incorporate information about events that have happened before? For example, suppose that instead of rolling the two die at once, we roll them one at a time. In this case, depending on the outcome of the first roll, the probability of getting a \(9\) will be different. To see how, let’s consider an example where our first roll is a \(3\). In the first scenario there was a total of 36 possibile configurations before any roll was made. However, now that we’ve observed one of the die as a \(3\), the total number of configurations is diminished,namely the set:

In this case there is only one possible event leading to an outcome of \(9\): the event that we get a \(6\) on the second roll. How do we calculate the probability of \(9\) now? By the end of this blogpost we’ll see that calculating the total uncertainty will require a fundamental and important result in probability theory, known as Bayes’ Theorem. We’ll work our way towards that point, but for now we’ll start with the simplest scenario.

Using What We Already Know

We’ve reduced the problem to the event that we have already rolled a \(3\), so all of our uncertaintly only lies with the second roll. In this case we’ve seen that there are only \(6\) possible events in total with only one of them leading to a \(9\). Using the same logic from the previous post, the probability of rolling a \(9\), given that we have already rolled a \(3\) is:

In fact, it is more general than that. Any roll that increases our chances of landing in \(A\), which is after all the preimage of \(X = 9\), will increase our chances. This fundamental idea can be explained graphically.

The Shape of Probability

Let’s go back to an earlier statement where I said that the probability of an outcome \(B\) is given by the relative size of it’s preimage:

Let’s unpack what this means graphically. We can visualise the events in \(\Omega\) as shaded regions - for example the set \(X^{-1}(B)\), which for simplicity we simply label as \(B\), is shown below: 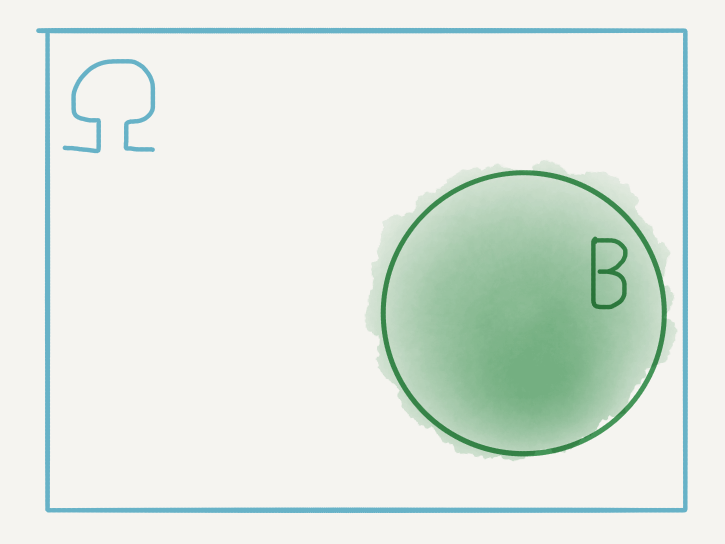 While these visualisations are just a heuristic and are too imprecise for measuring probabilities, they are helpful for visualising how different events interact, and hence how their probabilities may interact. 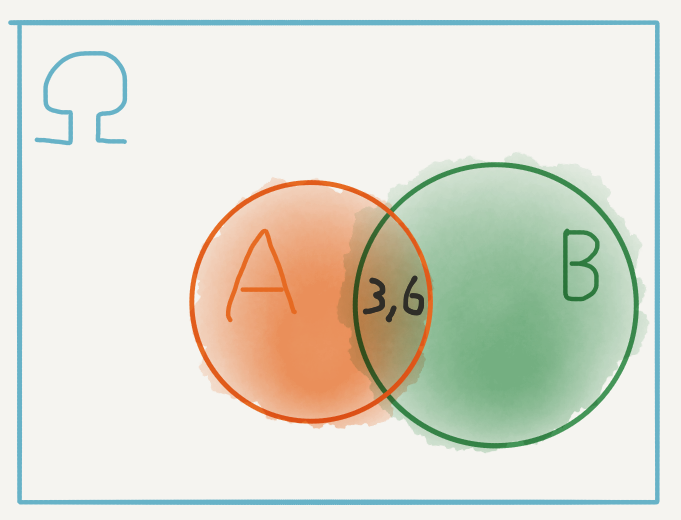 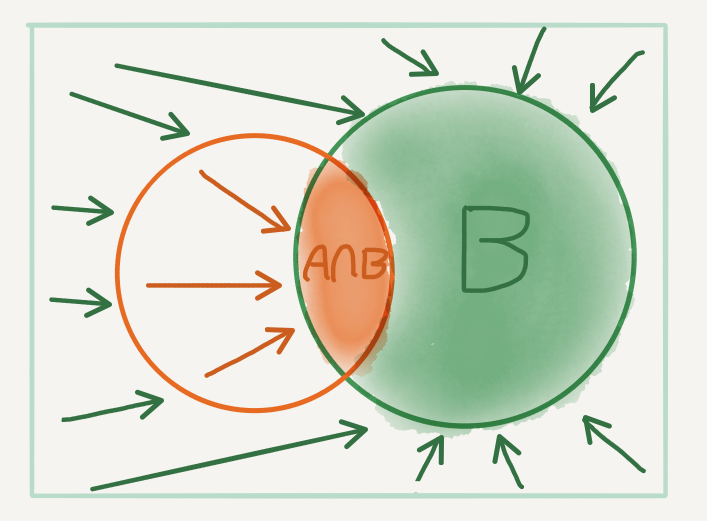 Now, when we take the probability of \(9\), given that we have rolled a \(3\), we have to revaluate how we measure size in context of what is now possible. The preimage of \(9\) is now just the intersection. Since the event \(B\) is assumed to have already happened (as visualised by the shrinking of the event space to \(B\)), we measure the size of the preimage relative to \(B\), so that

We can make this even more intuitive by remembering that the probability of any event is given by the size of that event relative to the whole set, namely:

which we can do since \(size(\Omega)\) is always positive. We can get a similar formula for the set \(A\cap B\). Plugging both formulas back into our expression for the conditional probability gives

Tying Back to Intuition

Immediately we know from elementary mathematics that the probability of \(B\) cannot be zero to avoid a division error. Indeed this reinforces our intution since we cannot condition on an impossible event!

All in all, we can think of conditional probability as probability which is projected onto some (smaller) conditioning space.

Once again, since \(\mathbb{P}(A)\) is positive and cannot be zero, we can use a mathematical slight of hand to derive an expression for the probability of the intersection:

This final result is known as Bayes’ Theorem.

In this formulation, if \(A\) is our event of interest and \(B\) is the conditioning event, then the quantity

is simply known as the prior probability of \(A\).

The Importance of Bayes’ Theorem

Fundamentally, Bayes’ Theorem gives us a way of measuring conditional probability by taking into consideration our total uncertainty. This is the point I promised to get earlier this post. In the example, instead of considering each roll one at a time, then enumerating how the total event space changes after the first roll lands on a \(3\) we can measure \(\mathbb{P}(\text{observe a }9 \vert \text{rolled a }3)\) directly by considering all of the quantities in Bayes’ Theorem.

I’ll leave this as an exercise but by thinking carefully about the likelihood (hint: recall how we derived the likelihood using the symmetry of the intersection), you can calculate the posterior and see that it yields the same result.

Although it is not obvious from the elementary example which I used to derive conditional probability using measure theoretic intuition, there are situations where computing likelihoods is much easier than directly measuring the posterior of interest. This post was intended as an introduction to conditional probability, so I will not go into the details here. However, for those interested I suggest reading Chapter 3 of the late David MacKay’s book Information Theory, Inference and Learning Algorithms, which is available for free here.

Although ITILA (as it is abbreviated to) has been superseded by more modern machine learning textbooks (which, considering the pace of research in machine learning, don’t have long either before they are out of date), it still remains a fundamental reference for learning algorithms, especially from a probabilistic point of view.

There is a natural tendency to think of conditional probability as specifying a causal relationship. If we condition \(A\) on \(B\), does this mean that \(B\) causes \(A\). In general this is not the case and it is dangerous to fall into this trap. Indeed, in the derivation I argued that the conditioning action is somewhat symmetric in the sense that if we can condition on \(B\), then we can also condition on \(A\). In most cases this is true. In fact Bayes’ Theorem demands that we think of conditional probabilities (the posterior) as depending on their conditional inverse (the likelihood).

Causality is one of the least well understood concepts in statistics. It requires that we rethink how statistical relationships are modelled. In the future, depending on how well I can understand the basic ideas, I hope to write a series of similar blogposts on causal inference.

The cover image for this post hints that conditional probability allows us to introduce a time element into our calculations. Indeed, given a sequence of events, we can take measurements at each event to get a random process \(\big\{X_1, X_2, … , X_t, …\big\}\). We can measure then measure the value of the random variable \(X_t\) at time \(t\) by considering what has already occured in the past. We are therefore interested in the conditional probability

Usually the time element is taken to be discrete.

Photo by Lukas Blazek on Unsplash